Its juts not only the food that separates Indore from the rest of the cities in India, but it also has some really amazing places, some for the food, some for the architecture, some for the culture and some, for the history. Each one of these places holds a significant importance and give Indore a certain touch of recognition. These places are historically rich and traditionally old but still holds a certain charm and for anyone who is visiting Indore for the first time, these places are must visit. Heck, the Indorians never get enough of them no matter how many times they have visited them! Here are the top 10 places that you must visit in Indore.

This is the place Indore is just incomplete without. If you are new to Indore, then you must head straight to Rajwada and have a feel of the building and the surrounding area. The main building has a mix of Maratha, Mughal and French style of Architecture with wooden construction in most of the areas. There is also a very beautiful looking garden at the back of the palace with fountains, an artificial waterfall, and some magnificent pieces of 11th century sculpture.

The Ralamandal Wildlife Sanctuary was established in the year 1989. The Sanctuary is spread over a total area of 5 sq kilometres. The scenic beauty of Ralamandal adds a charm to the place and you can discover wildlife there at its finest. It was once the weekend resort of Holkars but eventually got developed into a well developed trek and wildlife destination. There are Leopard, Black buck, Sambhar, Chital, Blue bull, Hyena, Barking deer and Rabbit etc. and birds of various Species along with flora and fauna. People, who are looking forward to spend more time in the area, have an option to stay at the Forest Rest House there. 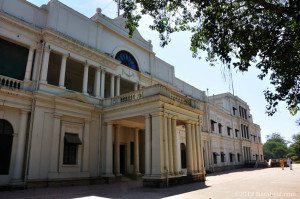 Laal bagh palace is the most spectacular and amazing architecture to see in Indore, hands down. It has this amazing blend of construction and design and the entire palace takes you by awe. It is a three storey building located on the banks of the River Khan and was the residence of the Holkars. The construction of the palace began in 1886 under Tukoji Rao Holkar II. It was carried out in three phases and the final phase was completed in 1921 under Tukoji Rao Holkar III. The whole palace has so much to offer and see, right from the Italian marble columns, grand chandeliers, rich Persian carpets, flying nymphs on the ceiling, Belgium stained glass windows, Greek mythological reliefs, Italian style wall paintings, stuffed leopards, and tigers. The gates of the Palace are a replica of the gates of Buckingham palace and they are twice the size. The beauty of the palace cannot be described in words and you must visit it to experience its glory.

The Krishnapura Chhattris of Indore is a monument that portrays bravery and courage. The Chhatris were built in the late 1800s, in the memory of the Holkar rulers and the tombs are built on the cremation spot of the Holkar rulers near Rajwada. The Chhattris were built in the memory of Bolia Sahib over the ashes of another woman ruler of Malwa, Maharani Krishnabai. These chattris are located on the bank of Khan River which is now under the revival by IMC. The Krishnapura Chhatris is one of the beautiful architectural heritages of the Indore city. At the time of festivals and celebration, the wonderful sight of the chattris are at its best and adds up to the ancient glory of this Indreshwar city.

Paataal Paani is a scenic waterfall located at a lush green locality, some 20 kms away from Indore. The area is famous for the waterfall that falls from the height of almost 300 feet. The area around Paataal Paani is also a famous trekking spot, where people come and experience nature at its closest. The entire area is very well maintained by the Indore Municipal Corporation with all the safety measures and round the clock security.

Kanch Mandir was made by Seth Hukamchand and is an important pilgrimage centre for the Jains. The temple is made with glass and mirrors and is located at Jawahar Road near the Rajwada. You will witness meticulously carved carvings at the walls of the temple that depicts Jain stories and raised sculpted figures that give a certain 3-D effect to the temple. The main idol in the temple is of Lord Mahavira and it is placed in such a way that you could see in 21 times in the reflections of glass.

Bada Ganpati temple is one of the largest Ganesha Idols in the world and having that in Indore is quite a thing of feeling proud for the locals here. The temple was built in the year 1875 and features a eight metre tall deity of Lord Ganesha, that is made using bricks, methi dana, limestone, jaggery and soil that was brought from seven moksha puris (Ayodhya, Dwaraka Maya, Kanchi, Mathura, Kashi and Avantika). Gold, copper, silver iron and brass are the main elements that are used for the construction of metallic frame of the idol. 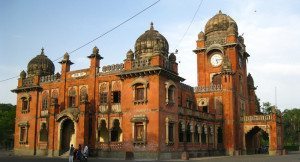 Mahatma Gandhi Hall was earlier known as the King Edward Hall. The building features Indo-Gothic style architecture and was built in the year 1904. The building has a temple, library, and a children’s park in the premises and features a four-faced clock tower. The hall is so big that it can accommodate around 2000 people at the same time. The area is surrounded by well maintained land that is open and is often used for exhibitions and book fair. If you want to see the British architecture at its finest, this is the place to be.

Gidh Khoh is far off located waterfall near Indore, at a distance of 40 odd kilometres from Indore. There is steep trek till the waterfall and is almost 4 kms long. The whole trek is full of beautiful flora and fauna and the path is lush green. The whole area is breathtakingly beautiful and dangerous at the same time. The waterfall is more than 650 feet deep and as the place is not visited by frequent travellers, there are no railings, or protection around the fall and it is highly advisable that you follow extreme caution. There are also little streams along the way that end in small waterfalls and there isn’t a single place in the whole area that is not interesting. 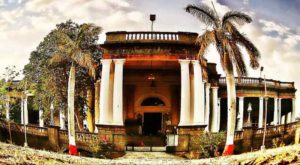 You will find many people coming here in the morning and evening to take a walk. This place is always quite and serene, no matter the time you are going to visit it. It is also one of the very few places in the middle of the city, where you are going to find lush greenery all year round. The entire area surrounding to residency is really calming and if you are looking for few minutes of beauty in the middle of the chaotic traffic in Indore, you could stop by this place anytime. You can also see peacocks in the evening, strolling in pairs in the garden, right in front of the main residency building.

One thought on “Places To Visit At INDORE”